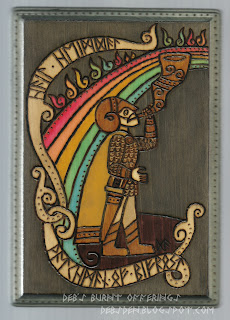 Ranting Recon: Becoming The Beast – Huginn's Heathen Hof: "Heathenry has always had a fascination with wolves. From ancient sagas to modern Facebook groups, the image of the wolf is ubiquitous. Among most modern Heathen groups the wolf is often seen as a symbol of strength, willpower, and fierce loyalty. However, while the wolf as a symbol might be a constant in our traditions, its meaning is not. Far from being a positive totem of our community, the wolf was the quintessential ‘monster to the ancient Germanic cultures. So in a community that’s rather focused on preserving the old Lore, how and why did this shift manage to occur?"

8 Things Marvel Got Wrong About Thor and Norse Mythology

8 Things Marvel Got Wrong About Thor and Norse Mythology: "
It may shock you to learn that Stan Lee and Jack Kirby did not do an accurate job bringing the Norse god Thor and his mythology into the Marvel comics universe back in 1962. If they had, they would have been arrested, because Norse myths are full of murder, mayhem and weird sex, most of which still wouldn’t be publishable nowadays. Here are eight major ways Thor and his world differ between the comics and the myths."