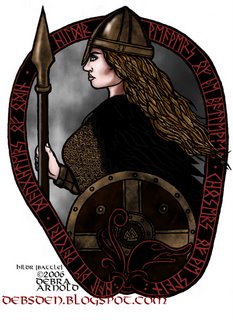 2006 Pen drawing colored with GIMP. The Valkyrie Hildr (Battle) with spear and shield. I adimit the profile could be better, since it is another that I just drew from imagination and not a model as I did with the previous Valkyries, but I'm quite pleased with the coloring and shading. Howl at ya later!!
Posted by Deb at 5:40 PM No comments: 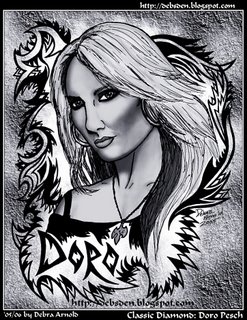 2005/2006 Black Pen, then scanned and colored with GIMP. This a portrait I drew last year of the mighty Doro Pesch from the back cover of my copy of her Classic Diamonds cd. note: This is a reworked version of the art I posted earlier...shading and coloring have been redone, along with adding a metallic texture. Also changed the title.
Next I'll be working on: a new logo for the Den, Valkyrie Xena from The Rheingold (new, BETTER version from the show), and another in my Valkyrie series, Hildr and a small Geri & Freki pic (Those are Odin's two wolves in case you don't know). These drawings have all been finished, they just need to be colored. Howl at ya later!!
Posted by Deb at 10:32 AM No comments: