Here's the finished version of the howling wolf pyro I posted earlier. I added trees and moon since it was so "blah" looking. 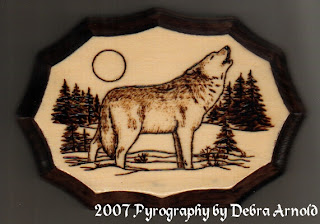 Bravenet blogs kind of stink so I'm back here again.  I'll leave the Bravehost page and it's gallery up for now...I really like to have my stuff hosted on different sites, like deviantART, Myspace, Flickr since it (hopefully) increases my chances of having it seen.  Oh speaking of Flickr, http://www.flickr.com/photos/debsden/  Howl at ya later!!!
Posted by Deb at 11:50 PM No comments: